Potts received his VC from King George V at Buckingham Palace in December 1915 and the national press duly dubbed him The hero with the shovel' He was showered with gifts by a grateful town. The Mayor of Reading presented him with a silver casket adorned with golden shovels and containing an illuminated address.

The casket containing the illuminated address 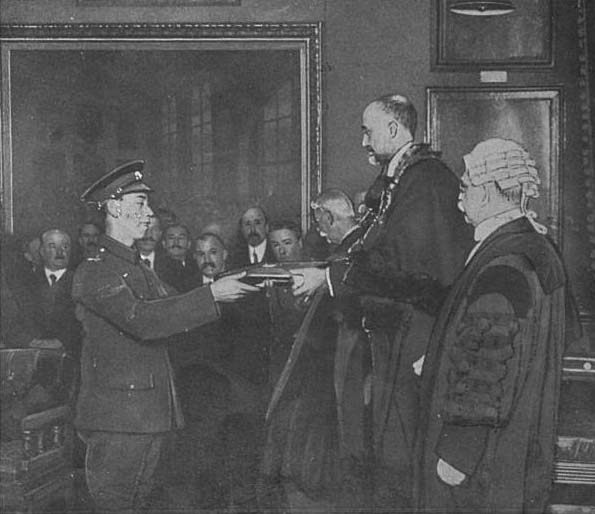 The Mayor presents Potts with the casket in the Council Chamber

The Berkshire Territorial Association presented him with a desk, his employers, Pulsometer Engineering, gave a gold watch and chain and his fellow workers gave him a tea service and clock. He received £25 worth of war bonds from Mr Keep of Newbury as the first Berkshire Yeoman to win the coveted cross.

Married a few days after his investiture, the severity of Potts wounds meant that he too never saw active service again. Instead he set himself up as a master tailor in Reading and ran a successful business on Alpine St, stood for local council elections and was commissioned as a lieutenant in the Home Guard at the start of the Second World War.

When the Unknown Warrior was buried at Westminster Abbey in 1920, Potts, along with other Victoria Cross holders, formed the Honour Guard. To learn more of this episode click HERE

Gift of life
Sadly Potts did not live to see the Allied victory. Work, war and problems associated with his wounds took their toll. His health failed and he died on 2 November 1943, aged just 50. One of the mourners at his funeral was Arthur Andrews, the man he had saved in Gallipoli almost thirty years earlier. But the gift of life which Potts had bestowed on Arthur Andrews when he refused to leave him to his fate was not squandered. Andrews outlived his rescuer by another thirty-seven years, dying at the ripe old age of 89 in 1980.

Fred Potts granddaughter Anne Ames and Arthur Andrews grandson Chris Andrews learned that they live just streets away from each other in Reading and although they both knew the story of Fred Potts heroic deeds they had never met. Together with Bob Binham, Potts grandson, Andrews daughter-in-law Norah and grand-daughter Penny Pountney, Chris and Anne were able to see the medal first hand and learn about the two ordinary Reading men united by a single act of selfless bravery.

On meeting the descendants of the man who saved his grandfathers life Chris Andrews said, Thanks to their grandfather ours was able to live to nearly 90. Chris went on to recall his grandfathers words from his hospital bed in October 1915, My people will be forever thankful, we owe Freddiea great debt which I can never hope to repay. And yes, we do owe him so much. None of us would be here if it wasnt for Fred Potts courage and remember that Fred had a choice, he could have left my grandfather on the battlefield but chose to stay with him. Revealing that Freds wife Ruth simply kept his VC next to the gas meter at home after Freds death, his granddaughter Anne Ames said: Its quite amazing to come here ninety-four years after the event and meet people who had a connection to it in the beginning. Fred never spoke about it, although he did say there was quite a bit of interest from the Borough of Reading and at his works when he came home. Her cousin Bob Binham added: It is lovely to unite the two families and amazing that people can live in a community and not know that they were that close all the time. Marvelling at how two families can be brought together by a single act Chris Andrews said, It is really interesting. If it wasnt for Frederick Potts then my father wouldnt have been born and I wouldnt be here today.'