Welcome to the Memorial 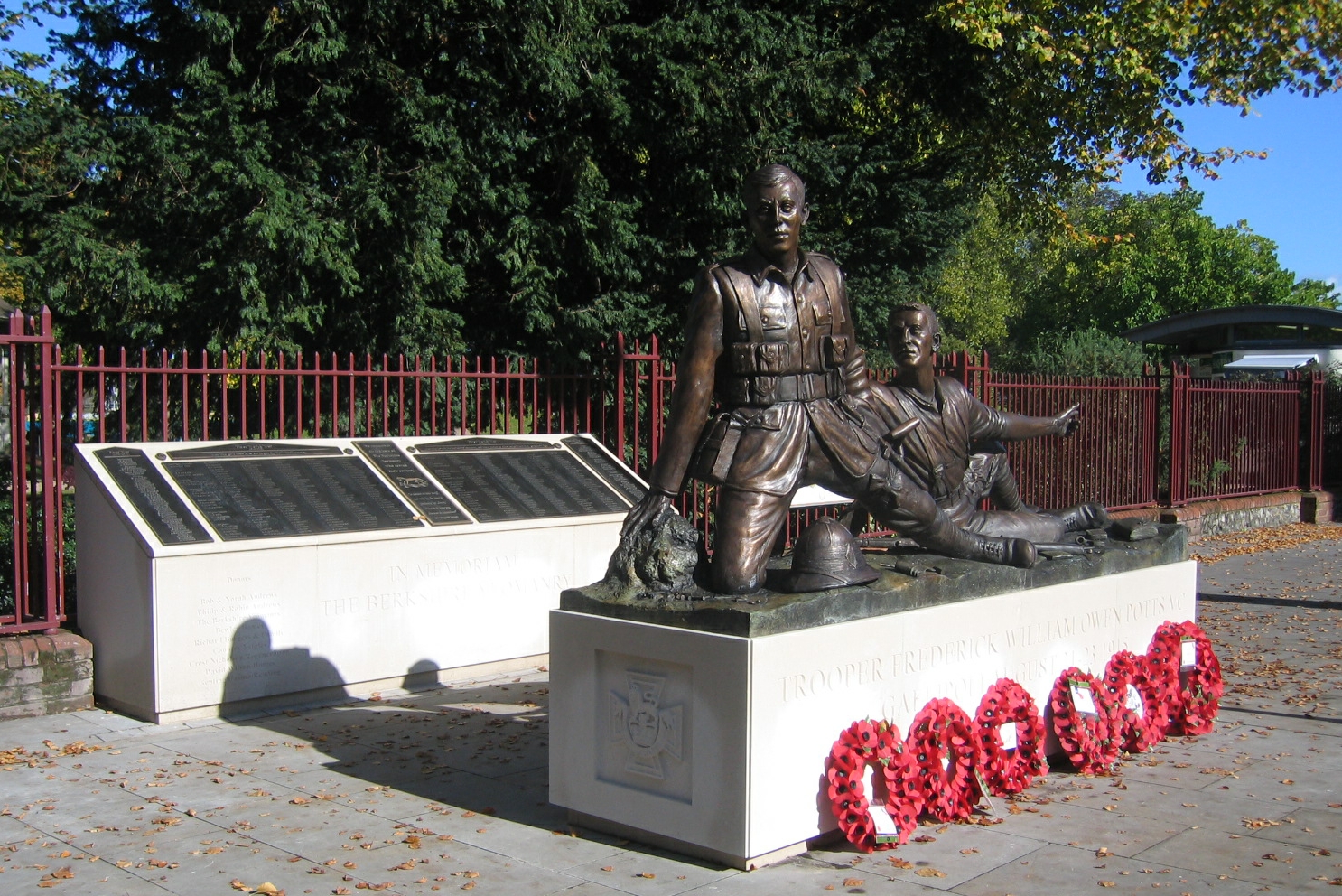 The memorial in its place outside the Crown Courts in Reading and showing the memorial to the men of the Berkshire Yeomanry who died in the Boer War and the two World Wars.

Frederick Owen Potts is Reading's only Victoria Cross holder and was virtually unknown in the town due mainly to his own modesty. Fred died in 1943 and many people in Reading believed the time was long overdue to recognise his bravery with a suitable memorial in a town centre location.

The Trooper Potts Memorial Trust therefore was set up to raise the necessary funds and commission a suitable memorial. On this website you can read his story and find out about the appeal to raise the funds necessary to commemorate a very brave and modest man.

The project to properly commemorate Fred's bravery was initiated after a broadcast on BBC Radio Berkshire by Graham McKechnie and Jon Cooksey. You can hear this broadcast by clicking HERE

As well as commemorating Fred Potts we are also mindful of the sacrifices of the many men of the Berkshire Yeomanry who gave their lives, both in the battle for Scimitar Hill and throughout World War One. Many of these lie in unmarked graves in Gallipoli. What is so encouraging is ther attitude of the people of Turkey today, who give honour and comfort to all the combattants of that dreadful campaign.

The memorial was unveiled on 4th October 2015 and was adopted in Jan 2016 by Reading Borough Council for future maintenance. We continue to receive good feedback about the memorial.

To see further information about the Making of the Memorial, the Unveiling (including films of the service itself and the order of service) and other events which mark the story web; CLICK HERE

We have had some very pleasing responses to the resultant memorial and we now have a special page to link you to some of the items that have been posted on the web; CLICK HERE

426 men of The Berkshire Yeomanry lost their lives in service of their country in the wars of the 20th Century, 353 in The First World War of which 74 were at Gallipoli. Their names have been placed on the Roll of Honour that is part of the memorial. Several people have adopted a name and we were very appreciative of their contributions.

Lieutenant W E G Niven, the father of the late actor David Niven, served in the Berkshire Yeomanry and lost his life at Gallipoli, he is commemorated. His grandsons in the United States have supported our appeal.

Adopters received a certificate of thanks and also details of the man; where they came from, any battles they fought in, their last campaign and where they are buried /recorded on a Roll of Honour in a foreign field.

Education
Since 2012 the Trust has worked with Reading College who have assisted us to deliver educational outreach events to local schools, Primary (usually mornings) and Secondary (from 10 minutes to a hour). We have also delivered presentations to local clubs; Rotary, WIâs, History of Reading Society, U3A, Reading Civic Society, Pensioner Groups, Reading Library. If you wish to invite us please contact the Chairman on 0118 959 8350 or e-mail bennettbaker@msn.com.

To support our education work a series of films was commissioned showing the process of producing the memorials; the sculptor at work (long version) or (short version) , work at the Foundry and the stonemasons (Click here). David Callaghan, former director of Hancock & Co, explains the History of The Victoria Cross click here . A very accessible summary of the Gallipoli Campaign, the lessons at the time and the consequences which run on today, by Forces TV, can be seen click here

After the war, the commander of the Turkish Army, Kemal Ataturk, who became President of Turkey, set out these sentiments in his declaration:-

Those Heroes that shed their blood
and lost their lives,
you are now lying in the soil of a
friendly country.
Therefore rest in peace.
There is no difference between the Johnnies
and the Mehmets, to us where they lie side by side
here in this country of ours
You the mothers,
Who sent their sons from far away countries
wipe away your tears.
Your sons are now lying in our bosom
and are in peace
After having lost their lives on this land they have become our sons as well
Ataturk 1934

And we recall the words of President J F Kennedy

Many thanks for your interest.