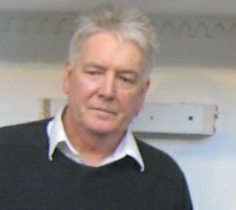 Our selected sculptor is Tom Murphy, who hails from Liverpool.

Tom has produced a diverse portfolio of sculptures, several of which can be seen on his website:

When we were considering the 21 expressions of interest from sculptors, members of the Trust were particularly impressed by his sculpture of Capt Noel Chavasse VC & Bar MC

Tom produced the Hillsborough Memorial which was unveilled in 2012

In August 2014 his frieze of The Liverpool Pals was unveiled by The Earl of Wessex in Liverpool Lime Street Station.

Tom has engaged with the Trust thought our fundraising efforts. He has delivered lectures to students at Reading College on the business of Art and Sculpture and has helped us at our Charity Balls. We are very appreciative of his efforts, and his patience as we worked to raise the required funds.

A film, produced by Third Lens Films, shows Tom at work on the Potts sculpture in his studio in Liverpool in January 2015 when the sculpture was approximately 95% complete. This can be seen on the ITV Meridian Website;

In March 2015 the Committee approved the final version of Tom's full size clay model. It incorporates most of the detail requested by the Yeomanry and other military historians who like to make sure that everything down to the buttons on the tunics are authentic.

The chosen foundry, Morris Singer Fine Art Foundry in Lasham, then converted the clay sculpture into a wax version in preparation for casting the sculpture in Bronze.

Casting started in the week commencing 8th June, it was complete by mid September 2015.